By order of the Staatliches Bauamt München II (public building authority) and the CAD-Department Bavaria, accu:rate evaluated the persisting geometry of a lecture room by simulating several scenarios and compared it to a reconstruction variation. 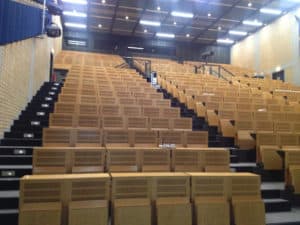 The lecture room of the clinical center Großhadern offers seats for 162 students, who - in case of a fire alarm - have to leave the room as quickly as possible through two exits.

In the following figures, the walking distances of the persons and the distribution of the velocities in the lecture hall are shown.

To decide about the reconstruction that shall guarantee a faster and safer evacuation in case of an emergency, a variation according to the current requirements of the building law was simulated as well as the scenarios with the persisting geometry.

Customer: Public building authority 2, CAD-Department Bavaria
Task: Evacuation simulation
Result: The variation corresponding with the regulations of the building law did not lead to an improvement of the evacuation duration