From science to practice

As part of the ESCAPE research project, an evacuation simulation of the Mercedes Benz Arena was carried out.

Stuttgart's Neckarpark is the site of several major events each year: the Cannstatter Wasen festival grounds are a popular folk festival location, and the Mercedes-Benz Arena attracts many thousands of soccer fans. To ensure that visitors can be safely evacuated even during simultaneous events, the Stuttgart police have joined forces with Fraunhofer IOSB and accu:rate in the ESCAPE research project. This project included simulating the evacuation of the Mercedes-Benz Arena during a Bundesliga match to evaluate the movements of visitors.

„With the simulation, we have provable values for escape route use and utilization. This helps us plan a safe event, especially when several are taking place at the same time.“ (Carsten Höfler, Polizeidirektor Stuttgart)

On the one hand, the simulation is intended to take a closer look at the movement of people through the stadium in the event of an orderly evacuation; on the other hand, it is interesting for the security planning of the entire Neckarpark within the framework of ESCAPE how many people leave the stadium when and where in what time.

With the help of the simulation, we 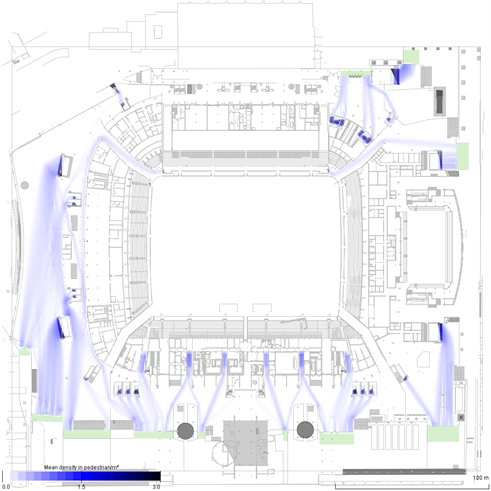 Figure: Pedestrian flows on the venue