We develop and improve crowd:it continuously. And now, version 2.2.0  is released.

In addition to various bug fixes, there are also some great new features that we would like to introduce to you:

In modern buildings, elevators are increasingly used to transport people to other floors. Especially in large event buildings, such as theaters, a large number of people have to be moved to different floors in a very short time. 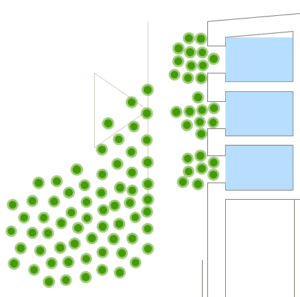 This raises a number of questions:

To answer these questions, corresponding evaluations have been integrated into crowd:it. 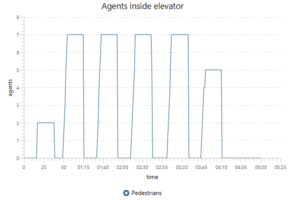 Especially with ticket counters, the question arises how many people are waiting in line at the counter and how long they have to wait.

In the simulation, ticket counters are seen as waiting areas to which pedestrians line up in a queue. With this release, queues can be evaluated.

We added the following options: 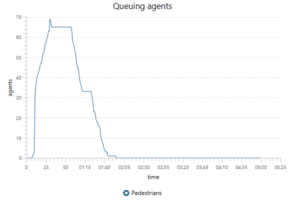 In this example, the queue length grows rapidly at the beginning of the simulation. However, the queue has already completely dissolved after 1:30 min.

In addition to our existing evaluation options for tripwires and polygons, arrival times can now also be analyzed.

For this purpose, two new data series have been introduced, which can be added to a chart.

The first data series describes the number of people who arrived at the evaluation object within one second. By using a function, this data series can be used to easily determine how many people arrive in x minutes in average. And thus the utilization, for example of an exit, can be viewed over time.

The second data series describes the number of agents, that have arrived at the evaluation object until a given second. For example, this data series can be used to show the people who have already reached a safe area.

In addition to implementing new features, we also focus on making crowd:it faster. This time, we took a closer look at the video and screenshot export and were able to speed it up significantly, especially for scenarios with complex geometry.

Have further questions? Desired feature not yet in this release? Send us an e-mail or give us a call!